Meet Tricia, one of the charity’s long-term volunteers. Tricia has been a invaluable part of the charity for many years, having been a former employee, a long-standing volunteer and a friend of St John’s. She has supported our staff and residents at Moorside Dementia Nursing Home for the past five years.

It was during this time that she also began volunteering at Moorside (from 2014), supporting the Activities Co-Ordinators and staff to carry out their duties and plan events and fun activities for the residents. She also is an active member of our community’s Chapel group and regularly assists with services, led by Revd Alison Dobell.

A big thank you to Tricia for all of your help, guidance and invaluable support since 1990! 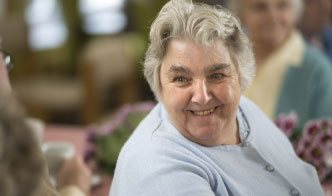